I don’t know what it is about cons, but I always seem to forget I’m actually going until a few days before. Then I get hyperactive and restless, waiting for the convention like a small child who’s going to Disney World knowing that their friends are already there.

With Dragon*Con, I was so burned out from travelling, I’ll admit to basically just chucking some things in a bag and hopping on the plane. Really, my main priority was not having any checked luggage—after crisscrossing five countries, there was no way I was dealing with more customs officials than I had to.

World Fantasy Con is in Toronto. On the surface, it seems like packing should be easy. After all, I’m not even staying at the hotel—I’m coming home each night.

Except that by “Toronto,” they really mean “Richmond Hill.” Close enough that staying in the hotel isn’t really worth it financially; far enough that I can’t get home quickly or easily spur-of-the-moment. In Atlanta, I could nip back to my hotel room if the need arose. Here, I need to make sure I’m set for the day.

One of my biggest regrets of Dragon*Con was that I didn’t have cards. Now I do, so finding/contacting me online will be much easier.

I came home from work one day with very low blood sugar. My anger and contrariness scared my roommate (normally I’m, you know, not angry). Mostly, hypoglycaemia just leaves me shaky and spacey, but even that’s not good, especially at a con.

My other regret of Dragon*Con: while everyone else whipped out their phones and instantly made plans on Twitter and Facebook, I was stuck running with my iPod to one corner of the second floor of the Hilton, because that was the only place I could find free Wi-Fi. Since my old phone died, I’ve become one of the cool kids with a smartphone. Plus, I’ve got Hapax-the-Podcast on there…in case I get bored (unlikely, but it is a long commute).

I’m a writer. This is a no-brainer.

Because they do seem to disappear…

If I’m being paranoid, the odds I’d ever have to use this thing are maybe 1 in 10,000,000,000,000, especially as my hives seem to be caused by stress, rather than an actual allergen. Still, I feel like collapsing in anaphylactic shock would kill the mood a wee bit.

Strikes me as being important.

No, I will not be crouched under dealers’ tables, highlighting history texts. But it is a long commute, and late November is my academic crunch time, so if I can get anything done, all the better.

Speaking of exciting things (aha, a segue worthy of The Roundtable Podcast), guess what? Blythe (whom you may know better as Serafine) was in an independent horror-comedy film—perfect for Halloween. I watched. I squirmed. I laughed. All good.

See you guys on the other side!

I Guess We’ll Find Out

I’m a worrier. Always have been, as far back as I can remember. Those “what ifs” can get vicious. And so, one of the most important things I learned while travelling is the ability to say, “I guess we’ll find out.”

However, IGWFO only works in situations over which I have absolutely no control. When I’m stuck in traffic, when I’m travelling, when I’ve done everything I can, it is brilliant for stopping the circular, racing thoughts (oh hai, anxiety).

There is nothing I can do. I guess we’ll find out.

But, if I have even the slightest bit of agency, all bets are off.

What if Hapax-the-Novel flops? IGWFO doesn’t work here. This particular flavour of worrying is almost a really bizarre optimism. If there is any possible way at all that I can actually do something, you can bet my brain will seize on the chance that maybe we won’t have to find out.

Ah, what if: the writer’s favourite question.

But in all seriousness, it’s good to distinguish between things that I should worry about, and things that I really can’t worry about. Three separate accidents on the bus route that takes me to work? Nothing I can do. Book coming out and now we need to drive sales? Yep, I can do things
to help that.

Will this bridge hold? I swear, my gravestone will say, “She found out.”

It’s not perfect. But in twenty-one years, it’s the best thing I’ve discovered for managing my own worrying.

So. How will the next few weeks and months go?

I guess we’ll find out.

They say a book’s publication date is like a birthday. You look forward to it, and count down to it, and finally, finally it comes.

I just did the equivalent of sleeping through my birthday party.

In what I’m sure will become an amusing anecdote for the ages, I actually just realized that you can order Hapax on Amazon. I mean, yes, I had heard from Dragon Moon that it was “live on Amazon.” But I only looked at Amazon.ca – while that site has the cover art now, it still says “currently unavailable.” So, I assumed “live” meant “the cover is up.”

Tonight, while double-checking something for the Hapax-Chat portion of Chapter 8 of Hapax-the-Podcast, I looked at the American version: Amazon.com.

There’s an “Add-to-cart” option. Apparently, if you order in the next 41 hours, you can get it by Tuesday. Unless I’m highly, highly mistaken, I think my book is out.

But seriously, I feel like this is enough of an adrenaline jolt to keep me up tonight. Suddenly, there is a HECK of a lot to do – more promotional stuff that I’d been planning, but for which I’d been assuming, “Not now, not yet.”

So, I need your help.

Please, please help me spread the word. Tell your friends. Leave reviews on Amazon, Goodreads, iTunes (for the podcast), on your own blogs. Let people know about it. Do let me know. Reviews and comments are seriously an author’s best friend. Don’t be shy.

Here are the links:

Without you guys, how can the Hapax be heard?

I’m going to go sit down for a minute now….

It’s a bit like learning a language. Over time, with lots of repeated exposure, you start to associate certain visual patterns with sounds. We do it all the time with letters. After hours and hours (and hours) of recording and editing, I’m finding myself doing the same with the playback on my screen.

I can usually tell which of my four actors is speaking just by looking at the audio. I can see laughs and breaths at a glance. Certain specific sounds and words are clearly recognizable.

This is all fairly abstract, though. Let me show you:

Gavin is easy to spot because his voice is the lowest. See, how his voice goes a LOT further down into the bass range than mine does? He’s also got a short laugh in there (the two vertical spiky things at the beginning of his line). 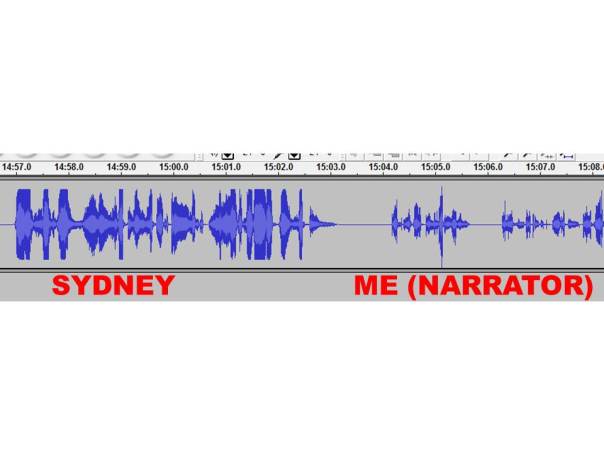 Syd’s lines also act as a useful marker while scanning episodes. Alesta tends to have nice, long speeches, and again, there’s a bit of contrast between our voices…

But it’s not just specific people’s voices that look distinctive. Certain words and sounds also have consistent patterns. If I know what the line is, it’s easy to see how the patterns in the playback match up to the words. So, if I’m looking for one of Simon’s lines, and I know the line immediately preceding it ends with a “t” sound, I can look for that “t.” 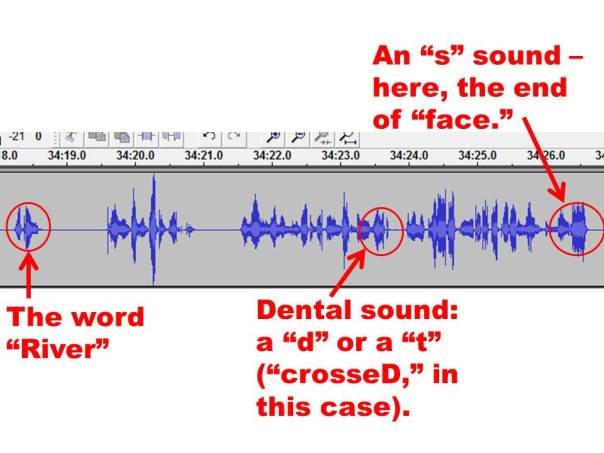 And then there’s the laughs. 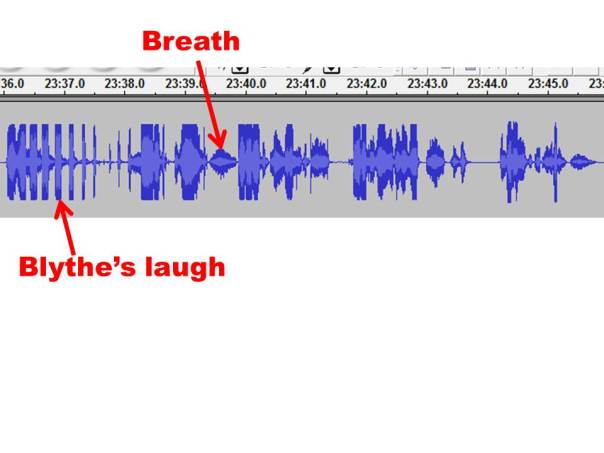 Of all the characters, Serafine laughs the most, so I mostly work with Blythe’s laughter. That broken-up pattern all but leaps off the screen, but judging by our outtakes, that’s what most people’s laughs look like.

So there you have it: a new way of looking at sound (pardon the pun). Useful, cool, and often, highly, highly entertaining.

Oh man, I love this.

In my now-distant past as a camp counsellor, my default names for children were “Bud,” “Sweetie,” and “Kiddo.” Before you learn a kid’s name, when you’ve forgotten a kid’s name, or when the kid’s name is on the tip of your tongue but you don’t have time to say it because they’re waving scissors around right now, any one of these is better than “Hey, you.”

There is a point to this, I swear.

When I was biking to choir this evening, I saw a kid take a tumble on his skateboard. He was up pretty quickly, but his lip was quivering, so I slowed. What came out of my mouth was not “Bud,” “Kiddo,” or even “Hey, you,” but rather, “Hey, mate, are you ok?”

The kid was fine, but it drove home a certain point: it took me less than a week to lose whatever trace of a New Zealand accent I picked up. The words, it seems, stay longer.

I’d already noticed this. At work, a visitor commented excitedly on my use of the word “wee,” exclaiming, “Wow, you even use old-fashioned words, too!”

There are others, as well. I confused someone recently by talking about “judder bars” (speed bumps). “Chuck it over there” is just as likely to come out as “Toss it over there.” I still cross the “carpark,” not the “parking lot.”  Even in The Next One (which, remember, was written entirely in the southern hemisphere), I see words that make sense in context, but that I probably wouldn’t have chosen a year ago.

Equally interesting to me are the words that have fallen away. It is “laundry,” not “washing.” I take out the “garbage,” not the “rubbish.” Halloween will bring copious amounts of “candy,” not “lollies.”

And just to tie this rambling somewhat into writing, think about characterization and dialogue. Vocabulary and word choice can be used to show all sorts of things: age, background, social class. I think travelling helped me “hear” myself better—I still can’t hear what’s so unique about the Canadian “out and about,” but I’ll admit that “sure” and “sorry” sound different.  Being more aware of voice makes it easier to try new ones; given the way The Next Next One is shaping up, this could get especially interesting.

Anyway, that’s my musing for the day. Incidentally, I was also given a pretty awesome opportunity. I’ve written a guest post for Philippa Ballantine, author of The Books of the Order, The Shifted World series, and co-author of The Ministry of Peculiar Occurrences. It should be up sometime tomorrow, or soon after. Check out her site (and books) here.

Tags: Dunedin, geek, Interpretive rants, musings, New Zealand, Personal, stories, The Next Next One, The Next One, Travel, Wordiness, Writing, Writing life