← My Dad: Two Years On
Blurring the Lines →

I seem to recall saying that 2013 was a lost year, and 2014 would be a year to build. By and large, that’s pretty much what happened. I started my MFA. I learned an immense amount through a writer’s internship. I wrote lots—no novels, but more short stories and scripts than I’ve ever done before.

One of those short stories was my goodbye to my friend and colleague P.G. Holyfield. It still doesn’t seem entirely real—dude, I just saw him at Balticon. In fact, I was recently collating lists of voice actors and podcasters I know, and I got halfway through typing his name before realizing what I was doing. So I was very grateful to editors Tee Morris and Val Griswold-Ford for giving me the chance to have one last Tuaca with him. Just a reminder: all funds from the anthology go towards P.G.’s kids. If you haven’t already done so, please consider starting 2015 with fiction honouring our friend.

This is usually the part of the blog post where I’d talk about upcoming projects in 2015. 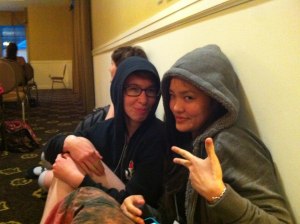 The Pop Fic Hooligans will be reunited!

Let’s go through the year. In a week, I’m jetting off to Maine for my third Stonecoast residency. As a third semester student, I’m expected to complete a major project over the course of the semester. I’m doing something vague and boring. A paper. Yeah.

However, my colleague, Katherine Sinclair, a bright young thing who may as well be my alter ego, is putting together a serialized podcast/transmedia project. She’s very excited. Not only is Katherine looking forward to podcasting again regularly, but she’s planning on using blogging and Facebook as part of the project. Katherine is also looking for voice talent: interested parties may enquire at coxwoodhistoryfunpark@gmail.com.

After returning from Stonecoast, I fight off polar bears here in the Great White North for a few weeks, and then I’m fleeing south again, this time to Virginia to spend some time with Pip, Tee, Boom, and kittehs. That trip is getting piggybacked onto a writer’s retreat. I’ve never been on one, but the idea of spending a week with friends and colleagues, working very intensively, is thrilling.

I’m devoting that week to a project that I’ve been noodling around for a while. It’s different. That’s all I can say right now.

Then I come home again. And then, a few weeks after that—

Heartstealer, as it’s actually called, drops on March 12th. I have a gorgeous ebook and print layout courtesy of Imagine That! studios, and a cover from Starla Hutchton that makes me swoon every time I see it. I’m sitting on details for a bit longer, but that’s coming. Because of course I would release a novel whilst in the middle of my third semester project and getting ready for my dayjob…

So those are three big things right in the beginning of the year. The second half of 2015 is my thesis semester. This time next year, I’ll be getting ready to graduate.

So there’s all that to look forward to. 2014 was indeed a year of building, laying foundations, and preparing. I can’t wait to see what 2015 brings.

All right, all right, here is another new thing I would like to do. See, whenever people talk about popular music, I feel completely lost, because my tastes are…eccentric. I love music, I’m realizing more and more just how much I need it. So I want to try and explain what I love, since I can’t usually join in on conversations.

What I’ve been listening to for the last month. Bogoroditse Devo is a stunning piece by Rachmaninoff (1873-1943). This is a Russian setting of the Ave Maria. The beauty of this piece is all in the dynamics. We start super soft and gentle, the runs of notes falling over each other like streams. About a minute in, the altos start driving, the tenors and sopranos fading in and out…except when they’re in, they’re getting louder, almost imperceptibly, until….

OMG fortissimo out of nowhere, on everyone, and the basses come back and the tenors and sopranos are blasting away on a high G (which is really fun, FYI), and the heart just soars with them…

And then we come back down.

It makes my heart catch, every time.

← My Dad: Two Years On
Blurring the Lines →