← What I Want
Guest Post: THE GIRL IN ACID PARK Cover Reveal! →

It’s December on Tuesday, and no one told me. This year has absolutely zoomed by—honestly, I’ve no idea quite how that happened. But as we’re in the home stretch of 2015, it’s time for a very important part of my creative life.

See, every New Year’s Day, I sit down with a blank piece of paper and a Sharpie. And I sketch out my main goals for the year ahead. Not in any great detail: it’s a rough list of the main points I want to hit by year’s end. Knowing this, the year has some shape. I’m not just flailing about between creative projects willy-nilly. Since it’s December on Tuesday, let’s check in. 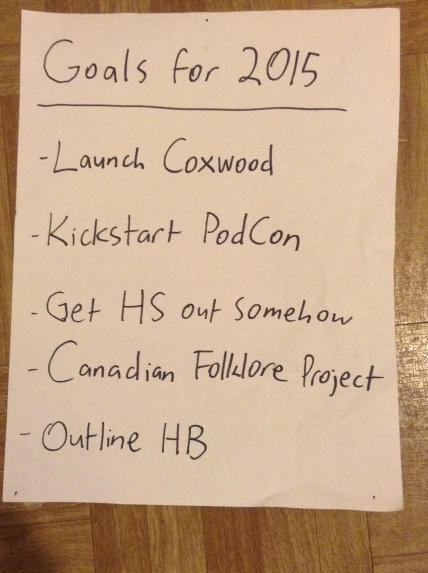 For me, this sort of planning is helpful because it’s a combination of measurable and conveniently vague. You hear about measurable goals all the time: the goals that you can straight-up say, “Yes, I did that,” or, “No, I did not do that.” Write more awesome is not a measurable goal, because you do you quantify that? Write three new short stories is measurable, because at the end of the day, you either did or you didn’t. Nothing wishy-washy about it.

Hence goals like “Launch Coxwood” or “Get HS out somehow.” I did both of these things in 2015, which brings a sigh of relief. I wouldn’t have wanted to go another year without releasing things, which is another reason why I find setting things to paper helpful. This scrawled-on list sits above my desk all year. It’s literally always in sight. Helps accountability like anything. 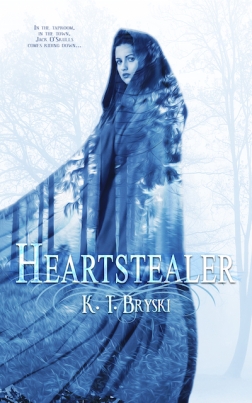 But sometimes—life happens, plans change. Note that I said “Get HS out somehow.” I wasn’t exactly sure how until two months ago, simply because monkey wrenches kept getting thrown into the mix. That’s fine. That’s not the important part with this sort of planning. The important part is that it happened.

Sometimes, though, things are put on hold. And that’s okay. My podcasting bestie Lauren Harris and I are still working on PodCon, but between our schedules, we figured it’d be better to take some more time, get the project really solid, and then strike it hard in 2016. You can label Coxwood History Fun Park and Heartstealer “complete;” PodCon is a solid “in progress.”

Right. So, Canadian Folklore Project. (Grant application is away, incidentally; we should find out by March.)

And lastly, “Outline HB.” This was meant to be Heartbreaker: a sequel to Heartstealer. Which is great, but I have two novels fighting for brain space right now, and the Magic Australian Dinosaurs story is winning.

(It’s not only about dinosaurs. And it’s not actually Australia. But there is magic!)

I figure as long as I outline that by the end of the year, I’m close. It’s still outlining a novel, right?

So there we have it: I more-or-less met all my goals for 2015. I’m learning it’s a fine balancing act of knowing definitively what you want, and being flexible enough to change course if needed. I suppose I should start thinking about 2016…

I let myself start listening to Christmas carols after American Thanksgiving, which means I’ve been binging for the last three days. It’s mostly been the medieval carol “Gaudete.” I love the poetry of Latin: “gaudete” means “rejoice,” and there’s plenty of that happening here, especially when the full choir hits at 1:24. Today’s the first Sunday of Advent, so I’m in a philosophizing mood, but that’s what it’s all about, isn’t it? Gaudete—rejoice.

← What I Want
Guest Post: THE GIRL IN ACID PARK Cover Reveal! →