Being the Freaking Energizer Bunny

Well. It never rains, but it pours. We got back to our museum life, hit the ground running, and then immediately got walloped with all the things ever. Including a video series! I’m not complaining. It’s all good stuff. It’s exactly what we want to be doing, and we’re stoked to see where it all leads.

And it also takes up a lot of brain space.

I’ve been doing all right, actually. The play and some short stories are moving a little more slowly than I’d like, but they’re moving. For now, I’ll take that.

I do want to talk about something, though. Lauren Harris first articulated it for me this spring, I’m conscious of it now, and it really struck home while I flailed about rehearsing my new monologue:

I’m the freaking Energizer Bunny, and I run at 100 mph.

It’s not even something I’m usually aware of, until it’s pointed out: the rapid speech, the constantly tapping foot, the thirty million simultaneous projects…. Sometimes, I feel like my body’s trying to compress 1000 mL of ideas and energy into 750 mL of KT. It mostly sort of works, but inevitably, stuff brims over and spills out.

I’m not the only one, though. There are other freaking Energizer Bunnies out there—I know some. It can be a wonderful thing, but it can also be challenging. When you crash at 100 mph, you’re more likely to crash spectacularly.

There’s really two main challenges that I’m learning to work around: one entirely related to the individual, and the other to dealing with other people.

When you’re the freaking Energizer Bunny, you tend to mistake exhaustion for accomplishment. You bank on endless energy, rather than actual self-care. Then, when the well dries up, you don’t know how to get yourself back on track. It’s like bright kids who coast through elementary and high school, and then hit university without proper study skills. Sheer strength only gets you so far; you need to learn how to channel and preserve it. 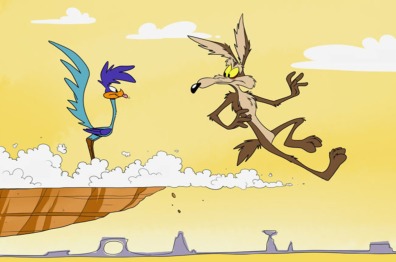 In a second, he’s going to look down….

Of course, measured pacing seems less appealing when the ideas are coming so fast, you’re already struggling to keep up. You know, those nights you want to weep because you can’t turn your brain off. Even if you wanted to. But there’s so many ideas, and not enough time, and another just hit, and…

And so I become that child who doesn’t want to go to bed. And if you can stay up all night, or take on another thing without consequences, why not?

Because ultimately, it’s better over the long term to take care of yourself. As I see it, you can roll at a slow burn for a good long time, or go out in a flash fire blaze of glory. Sometimes the latter is tempting, but it’s probably not the smartest.

What’s more, Energizer Bunnies are exhausting to other people. For a long time, that simply never occurred to me. And it’s hard, because there are all of these amazing things to do right NOW, and they’re fun, and what do you mean you don’t want to hit up another museum???

I’m learning to moderate my pace. Sometimes, that’s really, really hard. Again, because there are all of these amazing things to do right NOW—who wants to wait?

I do….because it’s not just about the amazing things. It’s about respecting other people’s limits and being a decent human being. And hey, if you’re good at working with people, more amazing things tend to happen anyway. It’s win-win!

A last thought: it becomes very easy to pathologize our various quirks. My thyroid has been tested approximately eighty times, because I am wee and run at 100 mph.

My thyroid is fine. 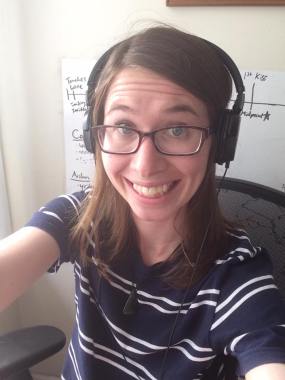 Much like Delilah, I’m a puppy on a sugar rush. 😛

I feel like a children’s TV show right now—but difference isn’t always abnormality. It’s this vast spectrum of people and experiences that make us humans so interesting. Of course, self-knowledge and understanding go a long way towards smoothing the places where those differences clash.

After all, we’re all driving on the same road. 😉

This upcoming choir tour introduced me to Haitian composer Sydney Guillaume. I really like the piece we’re doing, so I went hunting for more. And I found this one! I love it!

“Twa Tanbou” is about three drums having an argument: the boula drum, who says he’s the loudest; the tanbouren, who says he’s the most beautiful; and the kata, who thinks they’re both ridiculous. Guillaume himself says: “The central theme of Twa Tanbou: In order for a team to reach the optimal result, each member must play his or her own part as a team…”

The music itself embodies this philosophy—it demands very rhythmic precision and listening from all parts. Each line is like a piece of clockwork that, set in motion with the others, ultimately makes the gears move.