← Bonus Post: My Can-Con Schedule!
How fast it all moves… →

I love conventions. They’re exhausting, they usually involve consistent forays beyond my comfort zone, and I absolutely love them. You’re packing several hundred like-minded people into a hotel for three days and talking about the things we love. What’s not to like?

This was my first Can-Con, and Marie Bilodeau, Derek Künsken, and their army of committee members and volunteers put on one heck of a party. Honestly, I’m so used to being the token Canadian in the room that it was wonderful to spend time with writers from my neck of the woods. You don’t have to explain yourself, in a funny way.

It’s impossible to distill conventions down into 500 words. So, in a nutshell: the programming was stellar, the other guests and attendees hugely welcoming, and it was a great time. I saved five Six Stories, Told at Night beer coasters for future giveaways…the rest found their way into the hands of Can-Con attendees. The reading/performance also went well—thanks to everyone who came out! I met/chatted with a ton of fantastic people (here’s looking at you, SM Carrière, Nicole Lavigne, Sheila Williams, Jay Odjick, Fanny Darling, Eric Choi, Krista Walsh, Lesley Donaldson, Gillian Clinton, Madeline Ashby, Tanya Huff, and many, many, many more). I caught up with old friends as well.

Contented sighs all around.

Beyond the sheer enjoyment, I come away from Can-Con 2016 thinking about three things in particular:

Marie caught me looking a little overwhelmed the first night. Somewhere like Balticon, I can walk into a room and know more people than not. Can-Con was different, because I only knew a handful of people.

The first time at any convention is awkward, because it’s the first time. But here’s the thing I’m noticing: these situations are getting less awkward as time passes. Partly, I’m accreting a more solid, wide-ranging bedrock of people I know. And partly, I’m better able to deal with the initial butterflies.

The second night felt like Balticon: that same comfort and good vibe. Having awesome people helps, of course—but also, it gets easier.

This is where I belong

Connected to the point above. There’s just something when you hang out with other writers. You’re on the same wavelength. Attending this con brought that home even more.

I’m young, and new, and relatively inexperienced—but this is where I belong.

Being young, and new, and relatively inexperienced, it can be easy to look at all the mountain still ahead and wonder if you’ll ever make it.

On the Sunday, Can-Con held a meeting about joining SFWA. It was a great opportunity to chat with writers further up the peak, and it stoked the fire in my belly.

If we want it badly enough, we don’t really have a choice, do we? 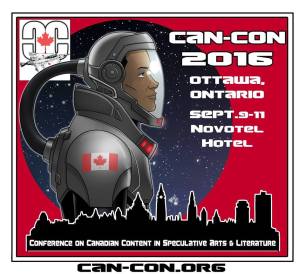 That was my Can-Con 2016. Thank you very much to the organizers, con committee, hotel staff, panellists, vendors, volunteers, and attendees. Your hard work is greatly appreciated, and you should be very proud. I can’t wait to come back next year. 🙂

“Falling Slowly” hails from the musical Once. Unusually for me, I preferred the movie to the stage version (the medium fit better, I think—the visuals just work better on film).

Anyway, it’s a wistful little piece, perfect for continuing to ride the wave of wistfulness that is Six Stories, Told at Night. Enjoy!

← Bonus Post: My Can-Con Schedule!
How fast it all moves… →