Excitement! I have a story out today! (Read it here!) “La Corriveau” is available over at Strange Horizons. I absolutely love the magazine and the fiction they publish, so I’m honoured for my story to be included in their ranks!

If you heard Six Stories, Told at Night, “La Corriveau” may be familiar. Marie-Josephte Corriveau was actually a real person. She was accused of murdering her second husband, she was hanged, and then, her body was suspended in a gibbet like this:

All sorts of legends grew up around her. She was a witch, she met with Satan, she actually had seven husbands. Myself, I looked at the cage and figured it would lend itself well to steampunk. 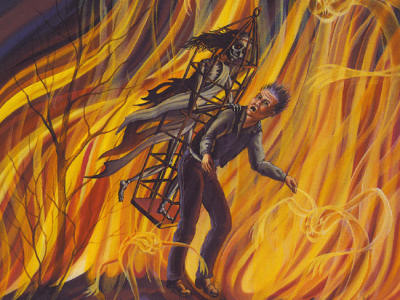 From http://www.shbellechasse.com, a different sort of cage. I couldn’t find the artist’s name, sadly, but if anyone discovers it, please send it my way!

To get some more background information on 1700s Québec, I started researching La Corriveau…

..and fell down a rabbit hole, wherein the historic record is utterly fragmented and often contradictory. As a historian, I couldn’t piece together what really happened. Did she kill her husband? Was she abused? Was there a cover-up? Since she was tried by an English court martial, were things lost in translation?

So, sitting in the media room of a cabin in Tennessee, I stopped trying to tell the real story. I tried to tell her story – all her stories – the story of the witch and the story of the woman. As with much of my fiction, “La Corriveau” has an unusual structure, but that’s the only way I could figure out how to do it.

In all these explorations into Canadian folk tales, La Corriveau has been one of my favourites. She is a fascinating woman…partly because, from what I can tell, she started out incredibly ordinary. I am quite fond of this story, and I hope you enjoy reading it as much as I enjoyed the research and writing!

An old Broadway standard: “Who Can I Turn To?” from The Roar of the Greasepaint – The Smell of the Crowd. This isn’t the precise version I’m familiar with – I know Louise Pitre’s rendition best, which is considerably slower and sultrier (I think she described it as the song that closes out the club, one last vodka in hand).

In any case, it’s a poignant little mix of heartbreak and grit. Enjoy!