← Thanksgiving 2016
Choir and Me: Or, How Sheer Stubbornness Eventually Paid Off →

Once, in the distant days of my youth, I was at a ChiZine reading series talking to Canadian fantasy author Caitlin Sweet. She was very kind to me (she ended up being the final, encouraging push to send Hapax into the world), and I’ll never forget the advice she gave me:

“Don’t worry about getting published too early.”

She went on to explain that publishing too early sets up expectations: both for you and by you. It can mess with your head. It tends to leave you perpetually insecure that you’re not living up to the promise and potential of your youth.

I did have a plan. It changed fairly rapidly.

Anyway, she was right on some counts. I’ve gotten a lot better at managing insecurities, but there is sometimes a certain worry that things are taking “too long,” that I’m not living up to the expectation set. While I’m pleased with what I’ve accomplished so far, I’m nowhere near where I want to be.

So I did a little research.

I pulled up some stats on twenty-four modern science fiction and fantasy authors. Some have been at this for a few decades. Some are new to the scene. Some are American; some Canadian; some British. Some are friends. (Hi, Mur! Hi, Pip! Hi, Jim!) Some, I’ve never met. All are still writing; all are authors I admire.

Specifically, what I wanted to find out what this: how much time passed between an author’s First Sale, and their Big Sale?

By Big Sale, I mean the sale that you look at, and say, “Yes, they’ve arrived.” The sale that made them as authors. It was less black-and-white than you’d think. Some authors took the fairly traditional route of starting with a short story in a small magazine and then eventually landing a novel deal with one of the Big Five.

For those who are primarily short-story writers, I  looked for the first big award: the Hugo, Nebula, World Fantasy Award, etc.

For one mostly-independent author, I went with the year they left their dayjob.

So a mixture of strict criteria, and saying, “Eh, I guess this makes sense?” Here’s what I found:

The average gap between an author’s First Sale and their Big Sale was 5.75 years. 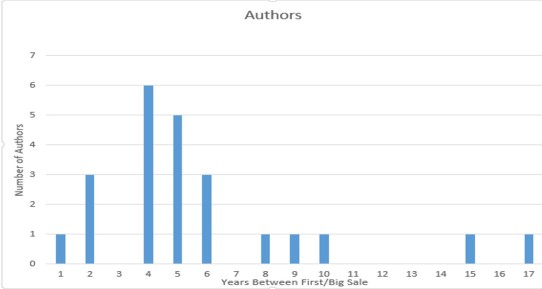 Of course, looking at the data, there are some outliers. For some authors, their First Sale was their Big Sale, and they’ve been churning out fiction ever since. Conversely, three authors had more than ten years pass between the two.

Generally speaking, though, the bulk of my sample fell within 4-6 years.

There are some theories I can put forth for this Five-Year Gap. First of all, in the case of novels, you’re looking at an 18-month lag time…at least…between acceptance and publication. Add to that the agent hunt, which can take a year, and that goes part-way to explaining it.

Otherwise…dude, after your first sale, you’re still growing. I return once again to my “boy soprano’s breaking voice” analogy. When the first cracks in your voice appear, you don’t go straight to singing bass. You might wander around the different parts for a while until you settle. Even if you can hit the notes, the full richness and technical mastery of an adult voice won’t come until later.

Similarly, there’s still a period of growth that happens with new authors. And sometimes, I suspect, the gap between sales may be sheer dumb luck, or lack thereof, or other priorities.

Because Caitlin Sweet was right and I retain some neuroticism over my relative youth, I also examined biographical information, where available. If a birth date wasn’t on an author’s Wikipedia page, I didn’t hunt too hard for it.

Looking purely at biography, most authors seem to make their First Sale in their late twenties to early thirties, and their Big Sale in their mid-thirties to early forties. Again, there are outliers (looking at you, Rachel Swirsky). The age range, I suspect, probably has to do with the emotional maturity that develops through the twenties. Lots of university kids write well; there’s not always the same depth, which is to be expected.

One interesting thing I noted: the younger an author was when making their First Sale, the longer the gap tended to be until their Big Sale (Swirsky aside). This lends credence to my “emotional maturing = better writing” theory, and seems to jive with Kelly Robson’s thoughts on being a “late bloomer.”

Of course, comparing your career to others’ is rarely touted as a good idea. That way, madness lies. I mean: look at all my outliers! Everyone follows their own path!

…but sometimes, it is comforting to look at trends. We all follow our own paths, but it’s nice to see if you’re going in the same general direction. Looking at my own data, my First Sale was Hapax in 2012.

I haven’t made my Big Sale, yet. But looking at the charts, I seem to be right on track. 🙂

Regular readers know of my love for Ola Gjeilo’s music. Guess what??? I got to see him this weekend at a choral concert! (I also saw my lovely former collaborator, composer Norbert Palej.)

I hadn’t heard the “Credo” portion of Gjeilo’s Sunrise Mass before, and it totally captivated me. Listen to the frantic, pulsing strings: totally captures the rush of urban life. The “crucifixus” motif around 4:24 is a jagged little heartbreak, and of course, I’m a sucker for the last driving, thundering two minutes.

← Thanksgiving 2016
Choir and Me: Or, How Sheer Stubbornness Eventually Paid Off →