← A Life of Odds and Ends
Guest Post: A Natural Antidepressant →

Like approximately three million people worldwide, I participated in the Women’s March this past Saturday. The Toronto march began on the steps of the Ontario Legislature: signs in hands, pink pussyhats on heads, and chants ringing out into the January air.

Thinking about it, though, there’s one more I would have added:

Speaking up and out is a very brave thing to do. Saying, “No,” is brave. Choosing to love is brave. It made me think, once again, of my favourite book: Not Wanted on the Voyage, by Timothy Findley. 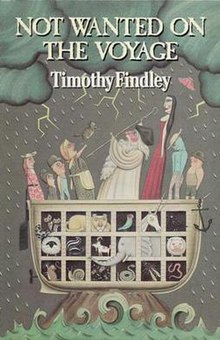 Not Wanted on the Voyage is a magic realist retelling of Noah’s Ark that gives a sharp critique to patriarchy and voices to the voiceless. In one scene, Mrs. Noyes (Noah’s wife) comforts bears during a storm on the ark, despite her terror of/anger towards them. Later, she muses:

“Cruelty was fear in disguise and nothing more…[and wasn’t] fear itself nothing more a failure of the imagination? That was why Mrs. Noyes had been afraid of bears. She had not been able to imagine consoling them.”

-Timothy Findley, Not Wanted on the Voyage.

When I look at Noah in Not Wanted, when I look at Trump, at the people railing against immigrants, the LGBTQIA+ community, minorities, Indigenous populations, women…I see a similar streak of fear. Look at their eyes. Listen to their tone of voice. You see it too, don’t you? These awful, cruel, immoral people—they’re all so scared.

It’s a hard choice to make, of course. Choosing bravery is exhausting. When you’re brave, you confront that fear: whether yours, or someone else’s. In choosing bravery, you imagine another way.

But that is the choice that three million people made this past weekend. It’s the choice that many millions more make in their own spaces. We’ll have to remake and recommit to it even more in the near future.

And yes, bravery is a choice that I will make in my fiction. If fear is a failure of the imagination—then let there be new stories to challenge it. Rewrite the characters and change the ending.  Undermine the dominant narrative.

Bring people to a place where they can imagine consoling bears.

Puccini’s “Crisantemi” (Chrysanthemums) is a devastating little elegy for strings. I love the constant tension between fragile delicacy and driving momentum. It’s a restless, unsettled piece. Apt, since Puccini composed it for the death of the Duke of Savoy (chrysanthemums are a symbol of death in Italy). In places, it almost makes one think of rain – perhaps a brooding, ruminative walk through evening drizzle.

← A Life of Odds and Ends
Guest Post: A Natural Antidepressant →