When I was a wee sprogget of 16, I went to tour a university. They had a creative writing undergrad, you see, and I’d somehow wrangled a one-on-one with one of the instructors. She seemed distant, impervious to my earnest charm.

Until I asked brightly, “So, do you teach genre fiction as well, or is it all literary?”

She recoiled like I’d slapped her. “Oh, no,” she hissed. “We only teach literary fiction.”

And so I did not attend that university.

I ended up at the University of Toronto, instead.

Through my late teens and undergrad, I similarly avoided  anything smacking of “literary fiction.” Meandering vignettes of people sitting on park benches, pondering the banality of existence? Dysfunctional families in the woods? Giants of the literary canon deriding my chosen genre as nothing more than space-faring octopi?

To hell with all that. I was a speculative fiction writer. I was interested in telling good stories.

Have I mentioned that I was incredibly arrogant through my late teens and undergrad?

In any case, I took a half-credit Science Fiction course, which is probably one of the best moves I’ve made. We started with Darko Suvin, forged ahead from Weinbaum to Gibson, and highlighted LeGuin and Tiptree along the way. My final paper contrasted notions of bodily autonomy in “Boojum” (Sarah Monette and Elizabeth Bear) and “Bloodchild” (Octavia Butler).

Quite a literary analysis, if you think about it.

Then I did my Stonecoast MFA. We’ve talked about it before – that was when my authorial voice started to change. And there—I learned that perhaps “literary” didn’t mean what I’d thought. Perhaps it wasn’t just “the opposite of genre fiction.” So what was it?

It was introspective. It was character-driven. It was devastating. It was lyrical and elegant.

Literary was an approach.

And literary could still have magic and spaceships. 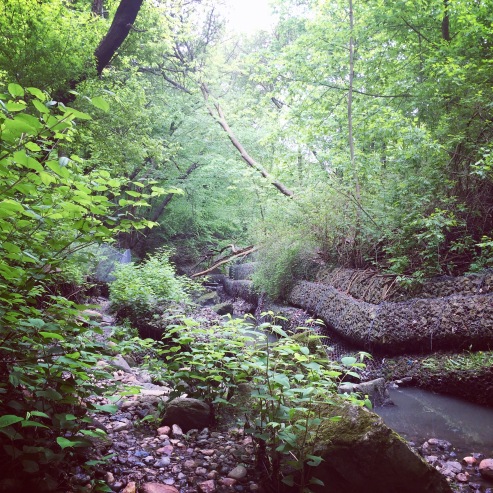 Dysfunctional families in the MAGIC woods!

So I’ve been undergoing another reading regimen. In some ways, I still feel like an interloper: scuttling across the border to see what I scavenge and bring back to my fantasy. But startlingly, I sometimes recognize myself in the small villages, the bitter-dark humour, the pervasive loss, the tension between things beautiful and grotesque…

Of course, humans like to classify things. We like to label ourselves. That’s what we do. And genre markers are a useful common language for markets, authors, and readers.

But I’m feeling my way towards a strange, interstitial space. Not terribly surprising: I’ve always been fascinated by the liminal. It’s the place betwixt-and-between, where we gleefully borrow principles, turn them inside-out, and blur the lines as we cross them.

That’s what I’m writing towards, I think. It feels right.

Have I done Carmina Burana before? I guess it doesn’t matter; it’s what I was listening to this week.

It’s an Orff cantata, using poems from a medieval manuscript called – appropriately – Carmina Burana, or, “Songs from Beuern.” The “O Fortuna” movement is the one everyone knows.

Two main things. 1) I love the contrast between driving whispers and orchestral cataclysm. It’s the Wheel of Fortune going up and down, you know? And 2) Those lyrics. They are. The most. Metal. Lyrics. EVER.