← In the Swamp
Tending my Garden →

I was getting ready to go out when the news of Ursula K. Le Guin’s passing broke across my Twitter. An odd little noise slipped my mouth—somewhere between an “Oh!” and a gasp. Then I burst into tears.

I rarely cry at public figures’ deaths. (The Queen is an exception—I guarantee you, I will cry when the Queen goes to her rest.) But Ursula K. Le Guin is different. She isn’t just a “public figure,” or even just “an American novelist.” She was one of the greats: a lodestar around which to orient.

Over the past week, many people have written many touching tributes. I can really only flail and sputter, “But—but—but—Le Guin!” But I’d like to point out something interesting about this whole writing thing.

You can apprentice with any damn writer you like. Putting your words—your brain-stuff—into print creates a certain kind of immortality. And if you’ve got an author’s words, you can learn from them. In an odd, beautiful way, we can dialogue with the dead. 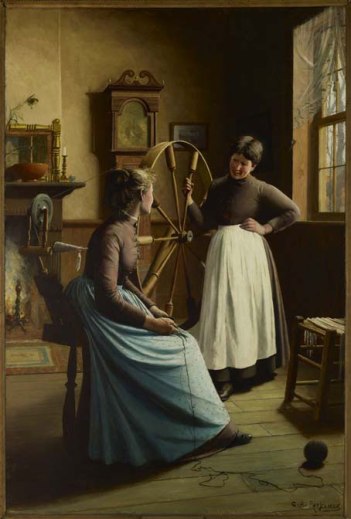 This is what people mean when they ask, “So who are your influences?” Who shaped you, who spoke to you, who made your heart sing, who taught you?

Who are you arguing with?

Who are you writing back to?

Who do you secretly (or not-so-secretly) want to impress? To connect with?

Over time, I think, we build an inner gallery of teachers. Sometimes, we’ve actually worked with them (I have internalized several Stonecoast mentors’ voices—hi, Jim!).

But sometimes, we’ve come to know them through their words alone. I never met Le Guin. In the back of my head, I maybe hoped we’d one time stand in the same room, but it seemed kind of like hoping to catch a comet.

So I read her fiction and loved her fiction. It made me look at things differently and re-evaluate not only my writing, but my life, my baseline assumptions about the world’s workings. Like all good teachers, she challenged and prodded and pushed me further than I thought we’d go.

But beyond her fiction—it was this particular book. 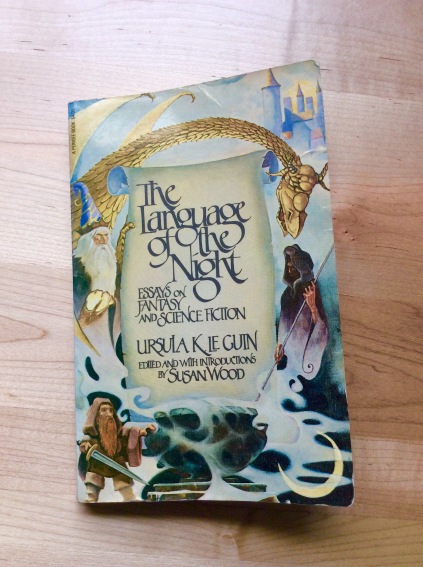 The Language of the Night is a collection of essays about science fiction and fantasy, theory and craft. It is one of my personal Foundation Texts, underpinning the way I understand fantasy.

Now, the kind of writing I am attacking, the Poughkeepsie style of fantasy…is a fake plainness. It is not really simple, but flat. It is not really clear, but inexact. Its directness is specious. Its sensory cues—extremely important in imaginative writing—are vague and generalized; the rocks, the wind, the trees are not there; are not felt; the scenery is cardboard, or plastic. The tone as a whole is profoundly inappropriate to the subject. (Le Guin, “From Elfland to Poughkeepsie.”)

When the genuine myth rises into consciousness, that is always its message. You must change your life. (Le Guin, “Myth and Archetype in Science Fiction.”)

For fantasy is true, of course. It isn’t factual, but it is true. Children know that. Adults know it too, and that is precisely why many of them are afraid of fantasy. They know that its truth challenges, even threatens, all that is false, all that is phony, unnecessary, and trivial in the life that they have let themselves be forced into living. They are afraid of dragons, because they are afraid of freedom. (Le Guin, “Why Are Americans Afraid Of Dragons?”)

You see it, right? In her essays, she’s doing precisely the same thing she did in her fiction. She is challenging us. She is pushing us past the solar system’s last orbit, into the vast wealth of interstellar space beyond; from the shallows to the open sea; to what feels comfortable to what is Truth.

She did that not just for us writers individually, but for the genre as a whole. She lifted speculative fiction to what it could and must be; the thing we were too timid to dream until she showed us how.

So now we’ve lost our lodestar. But we have her map, in the form of her words. There’s only one thing to do, really. Keep going. That’s what any teacher wants, in the end: for their students to drift free and explore past the edges of the map.

Thank you, Ursula K. Le Guin. You will always be our teacher.

I love Vivaldi, and I’m absolutely fascinated with this piece. The title’s a total spoiler, but I was researching female tenor/basses for reasons, and I can’t stop listening!

← In the Swamp
Tending my Garden →