When it rains, it pours! More SIX STORIES updates for all of you!

First, we needed to take promotional photos for the play. These are the images we send to the Toronto Fringe for use in the programme and website. 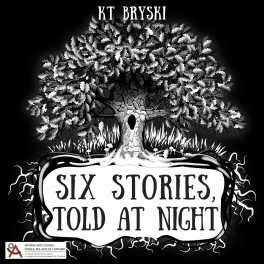 We thought it would be cool to recreate it as much as possible…in real life! And so I spent a very pleasant evening tromping through Toronto’s least-sketchy ravine, looking for a suitable tree.

Although I heard my own podcast running through my head, over and over:

At the ravine’s edge, I hesitated. There could be druggies in there. Gangs. Guys like Peter.

Hence choosing the least-sketchy ravine. I found a very nice tree. Though it’s hard to tell without leaves, I’m fairly sure it was an oak cultivar. This is what it looked like on my scouting expedition:

And this is what the ravine looked like, post-April ice storm: 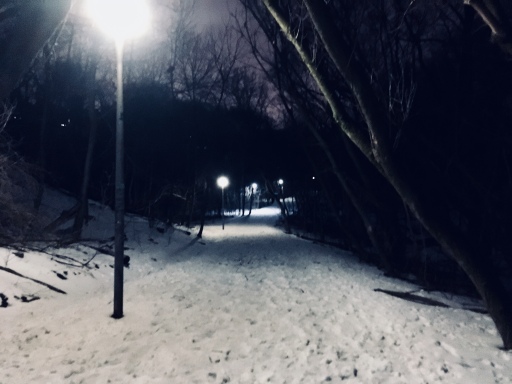 Snow by itself wouldn’t have been awful. This is Canadian theatre, after all; some snow is probably appropriate. The problem is that we’d already decided that Blythe would be shooting in a sundress—though the season is never specified in the play itself, the Toronto Fringe is in July.

She was a trouper. Armed with a portable light from our awesome pals at Missed Metaphor Productions, our intrepid photographer, and a thermos of tea, we set to work.

Table-reads aside, it’s the first chance I’ve had to see Sam come to life. And pals—it’s so flipping cool. This is my favourite part of playwriting: this moment when someone who’s only lived in your head is suddenly standing before you. While I mainly write prose, theatre gives me too great a high to shake completely.

Also—like, we were in the woods, at night, in a distinctly faerie-esque atmosphere as the April snows drifted down.  “This is what Sam did,” I thought. “This is the story.” The fabric between our world and SIX STORIES’ felt a tiny bit thin at that moment.

We got the shots we needed, we went out for drinks, and there was much rejoicing. 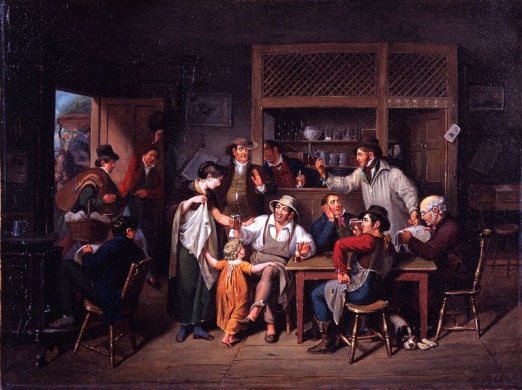 THEN we launched a GoFundMe for the show. We’re on a shoestring budget for this show: Fringe works on a profit-share basis. Expenses come out of the box office, and the remainder gets split amongst the company.

“We don’t need much,” Blythe and I told each other. “Just to offset some props and stuff.”

We blew past our goal within 12 hours.

Which, hey, lesson learned. We didn’t think big enough the first time around. So back to the drawing board we went.

“I mean…well, we’re gonna need to get programmes printed.”

“Yeah. And it’d be nice if we could…you know…not worry so much about the set, props, and costumes.”

Currently, we’ve got a number of stretch goals and reward tiers (yes, yes, if we make the Ultimate Uber Stretch Goal, I’ll write another season of Coxwood History Fun Park). And we’re completely humbled by the response thus far. Seriously, our most sincere thank you to everyone who’s shared, liked, commented, supported…we literally couldn’t do this without you.

We want to make you proud. We want to produce the best show possible. We’re so very thankful for your belief in us.

The GoFundMe will close on May 2nd. Then…well, I guess we’ll see if we return to Coxwood.  We seem to be well on our way! You can find the campaign (and donate, if you’re so inclined) here!

It’s been a lot of emotions and long nights, pals. But we are so very happy.

Ahh, Ēriks Ešenvalds, you awesome contemporary choral composer. “Only In Sleep” is neat because it kinda sounds like a traditional folk song, but it’s got choral chords and harmonies up the wazoo.

Also, super poignant lyrics. But from Sara Teasdale, I expect nothing less. 😉