Do you act while you write?

Pausing from rewrites, and struck with a sudden thought, I asked a question on Twitter last night. More or less, it was: Do you ever find yourself acting things out as you write them? Possibly because I posted it in the wee hours of the morning (I was editing, after all), I got little response, and I suspect it’s now been swallowed in the morning rush of tweets.

That’ll teach me to be on Twitter past midnight.

But I thought I’d talk about it here, because it is something I’ve noticed in myself, and I’m curious to know if other writers do it too.

Of course, I’ve heard of writers getting on their feet to block out fight scenes, especially if they come from a combat background (hi, Erik!). I’ve done that. Sometimes it’s highly necessary simply because I don’t have a combat background. It’s a lot easier to imagine a response to someone throwing a punch when you’re standing with knees apart and slightly bent, rather than sitting at your chair. Ditto with action scenes.

There’s a wonderful story Timothy Findley told of learning to describe the world from the viewpoint of a blind, elderly cat. On an isolated stretch of beach, he crawled about on all fours, eyes squeezed shut, getting his face down into the sand, noticing the briny smells around him. Of course, the beach wasn’t as isolated as he thought, and a young couple found him and assumed he was on drugs. As soon as they left, he ran off. I like Timothy Findley. If he hadn’t passed away some years ago, he’d be top of my list of authors to sit down and chat with.

Then there was the time in Strix when I paused, fingers poised in mid-air. See, there’s a phoenix, and it curls up beside the main character, so I staring slightly to the right and into the distance, trying to envisage exactly how that would work. Finally I found a stuffed animal about the same size and lay down. It was a ferret, not a phoenix, but it got the job done in terms of feeling something soft against the crook of my arm. 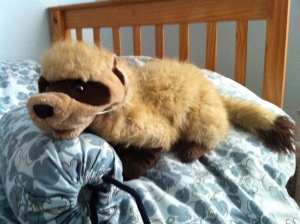 My phoenix stand-in. Thanks, buddy.

But that’s all deliberate acting. I guess the other thing I’ve noticed are actions that are more subtle. Facial expressions mimicking those of your characters (not that this happens often, I swear­—I’ve seen pictures taken while I was writing, and I mostly just look glassy-eyed). Touching your own face when someone touches your MC’s. Stuff like that. It doesn’t always feel as conscious, which is interesting. Super-empathy for the characters, unconsciously filling a certain need, or just a weird quirk?

No wonder there’s such a huge crossover between actors and writers!