“We Made This” – Why I Write for Theatre

Last night was the first time I got to hear scenes from East o’ the Sun and West o’ the Moon performed by the kids.

“Uh, so I’m a really late addition,” I told the ticket-takers. “I hope I have tickets? Katie Bryski?”

One rifled through envelopes. “Who’s your chorister?”

“Oh, um, I don’t…” I awkwardly pointed to the giant sign a few metres away. “I wrote that.” 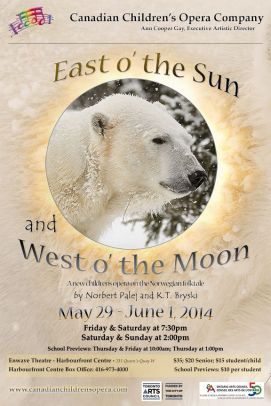 I see my name!

Thank goodness I made it out in the end. My synthesized score gives some idea of the music, but really, it has nothing on the human voice.

The piano thrummed the opening chords. I heard Norbert’s winds, the beautiful, aching yearning that characterizes this opera. I clutched my companion’s hand as the kids took their collective breaths, opened their mouths… 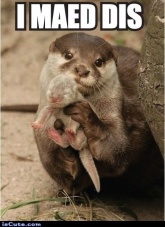 Except it wasn’t just me. That’s the beautiful thing about writing for theatre. It’s never just you. We made this. My collaborator, Norbert Palej, is a stunningly talented composer. From a gorgeous wind motif, to witty (and biting) musical jokes, to incredibly complex duets and trios, I hear something new every time I listen to it.

And the kids. Man, those kids. They did it. They nailed it. Sure, this was only a few excerpts—but they got it. With accompaniment, with Norbert’s music, with the kids’ voices…it actually sounded like a real opera. Because somehow, it wasn’t real yet before. Not when I was tapping out meters on my desk while eating Jamaican patties. My own words hit me in a totally different way than they ever have before.

So many different aspects, so many different people putting their work and creativity. Theatre is greater than the sum of its parts—its magic comes from this synthesis. And for me, experiencing my words brought to life—whether through a straight play, a podcast, an opera—is a high unlike any other. Even…and I almost hesitate to say this…even a book launch, or seeing my stories in anthologies or magazines isn’t the same.

Theatre lives. Theatre breathes. Theatre does different things than printed words, unlocks and punches a different part of my brain.

Yes, I write novels and short stories. Those will likely comprise the bulk of my writing. But as long as that magic remains in the theatre, I suspect that I shall always write for the stage in some way. There’s so much strength, potency, and love in collaboration; how could I not?

Now to prepare myself for that opening night energy. Just under three weeks until premiere.

Cool Thing of the Week

Obviously, this bear. This is one of 100 polar bears made by the CCOC. He is the polar bear from East o’ the Sun and West o’ the Moon, and he’s wearing a t-shirt with the CCOC logo. 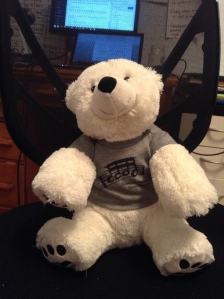 And he sings music from the opera. The kids recorded a short segment that plays when you squeeze his paw.

Let me say that again.

This bear freaking sings words that I wrote!

This is one of the coolest things I have ever seen. I’m still in shock, actually.